6 Nov. These are live notes taken during the first of 2 “technical seminars”  on the London Plan. Caution: there may be mistakes and we’d be glad of corrections. Thanks to Yinuo Hu for many corrections from her notes. Notes from the second seminar are gradually coming together here.

There is a webcast here.

Is this useful? Will it be useful to Just Space member group if we do some blog reports on the EiP itself (starting in January)?  Please comment at the end of this post.  Press never reports EiP proceedings and, so far as we know, there is no way to follow what is happening, though congratulations that this time the GLA is doing webcasts.

First off Melissa Wickham on the employment projections. Her presentation is here, along with others later in the day.  Read her presentation (not summarised here)

Cristina Howick (Peter Brett Associates) asks on Borough breakdowns. A: it’s trend-based, essentially, informed by knowledge of office capacity & then constrained to add up to London totals. Includes a breakdown between employees and self-employed.

Michael Edwards (Just Space) asks for clarification on the population/worker basis, and on using productivity as a key variable. Melissa stresses the basis of the numbers in jobs; and productivity she accepts is perhaps not robust given the uncertainty about whether the recent flattening of productivity is a structural (permanent) change or a blip. She points out that their past projections have turned out to be accurate.

Duncan Bowie (Highbury Group) asks about employment capacity assumptions, given land losses; what assumptions are made about commuting in and out of Greater London. Answer not very clear. Can anyone clarify? Answer that this was more a policy than a technical question.

Ian Gordon: Growth of employment has been so concentrated in 7 central boroughs and I’m uncomfortable that we don’t understand what has been going on. Huge uncertainties about Brexit immensely important for these central boroughs. Central London has done incredibly well in last few years; quite unprecedented and not yet well-understood; seems risky to extrapolate that. Answer: GLAE not sure. Partly productivity in the City had been treated simply as a feature of professional services but now subject to stagnation. We combine the extrapolation with careful thought about what the sectors have been doing. (Clarify.)

Someone asks about the health economy where the stresses are unprecedented. A: Some attention paid to health as affecting employment, but no attention to Brexit effects.

Jeffrey Lever from LSBU: investment appears to be far more important than productivity growth in producing output growth. What if a Labour govt increased public investment, or Brexit lowered investment? Answer: these questions are not explicitly addressed.

Ben Corr speaking. See his presentation. Plan based on 2016-based projections, using the trend-based ones. Method comparable with Office of National Statistics (ONS). We convert from population to households using the hh size work of MHLG (now taken over by  ONS). Cohort survival model of standard kind is used. Use 5/10/15 year histories of migration, producing very different results.

10-year trend chosen for GLA projections. Detail in the presentation. Rich and useful. Read it carefully.

Latest ONS projection produces estimate 700,000 lower than previous one (slide 40) for 2030.  But the ONS mehod of constraining sub-national forecasts to fit the national total can make a difference of 800,000 to London population!

Choice between the 2 projection makes a huge difference (slide 50) 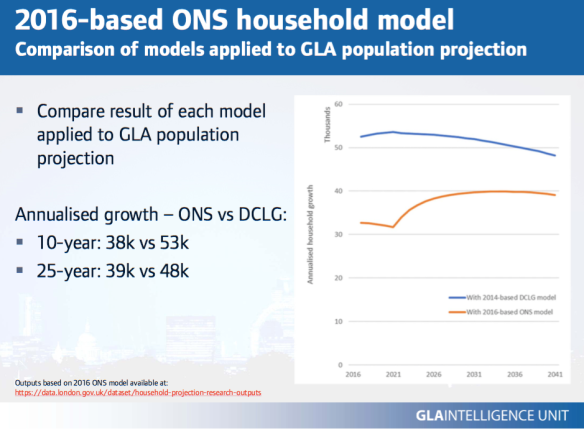 Questions probe reliability of input data. GLA admits it is all rather fragile & they do a lot of cross-checks. No explicit attention to rents/prices and their effects though clearly their effect is embedded in household formation rates.  Christina Howick asks whether London Plan will be amended in light of latest estimates. Answer (in effect) NO.   Another Q is whether the new reversal of life expectancy among poor people was being taken into account. A: the projections assume that mortality improvements stall, but not that they go into reverse.

Careful Q on the recent growth of migration out to rest of UK. Answer: 10-year trend missses or dilutes this change. We haven’t yet tried a 5-year basis. We’ll monitor and see.

Bowie asks how much the projections are constrained by housing supply: A: not explicitly. The borough-level figures are published but we don’t recommend boroughs use these but instead make housing-led projections themselves based on their detailed local knowledge of what is being built.

Christine Whitehead (LSE) on the assumption that all relationships in the future are like the past. Why not try to relate it to the alternate economic scenarios? Interesting idea, replies Ben. We could look at it, “going forward” says Ben. We have done some experiments.  CW says duration of residence a big determinant of whether people become households / churn & turnover. A: we are looking at consumer data on turnover/churn.   Hope to get much deeper into it.

Richard Lee (Just Space). Doesn’t demog mean more than just quantity – like race, ethnicity, social class. To work on housing need we need this material, e.g. for the boroughs with majority of BME people; and massive gentrification is transforming social class. Refers to equality-testing of the work. A: that’s partly for the policy people to answer. The Intelligence Unit is working on social class & ethnicity but I can’t tell you how that feeds into planning policy.  In our projections there is NO analysis for distinct ethnic or class groups.

Ian Gordon: By assuming future will be like the past, you are assuming London continues to fail to build enough;  what if the plan succeeded? Wouldn’t more households form? A: Ben compliments Ian Gordon on his work prior to the previous plan, and hopes to be able to look better at it in the future.

[comment: the treatment and presentation of demography is so good, compared with economy.  Clear that the people responsible love their work and want to get it right.]

Lunch break now. Housing need/demand (SHMA) next; then Land Availability (SHLAA). Both presentations are online – see top of this page.

3 main elements: household growth; affordability; backlog. (figures in slides) yielding need for 55,000 pa. net additions of dwellings. The table of need (table 7) is result. But the tenure mix in that table is just a reflection of the existing tenure divisions.

Backlog carefully explained. (Comment: Doesn’t appear to base it explicitly on affordability (only indirectly via arrears). handling of backlog over 25 years. Reasons for this long phasing utterly un-reasonable – quote below)

Assuming 3.8% of future stock would be vacant or second homes.

Bowie Q: govt guidance was to solve backlog over 5 years; First London Plan used 10 years; latest had 20 years. Now you are proposing 25 years! It would need output of 95,000 p.a. if you reverted to 5 years!  Answer: it would be nice. But we never meet it. Realistic.

Bowie: Why do you assume (among concealed hh) that single people will always be single? Some may form relationships or have children once enabled to form a household of their own.  A: yes, but we don’t know how they would behave so have.

James Stephens (HBF) Your adjustment for affordability is not an addition to the 65,000p.a. target is it? Answer not clear to this scribe.

Christine Whitehead: both 10-year backlog, & size backlog, vacate units. So is it net additional need? Answer: only the concealed ones.

Jed Stephens LSBU when will London be too big? (Great Q)

John Hoeny CRS advising Assembly. No of one-bed units is staggeringly huge. How have the assumptions made that? Depends heavily on assumptions about under-occupancy. Table 7 should shown the effect of different assumptions. Need much more detail.

Ilinca Diaconescu (LGT) It’s a policy, not a technical, descision to exclude Gypsy & Traveler needs from the London study. The earlier study is still in use and the EHS excludes gypsies and travellers. Will be GLA consider doing innovative work which really addresses this great need. Answer: yes that old work was good, but it worked because the boroughs did it.  As a regional authority we couldn’t do this without boroughs.

Sharon Hayward (LTF) 162,000 backlog is for social renting. How long do households have to wait? People below median income levels, paying very high proportions of income in private rent…   Also you fly in the face of studies on downsizing in Social renting. A: by 2041 we assume that each household will be in an appropriate-size dwelling.

(Comment: lack of data on why people move out of London, role of rent/price etc is responsibility of GLA, surely.)

Questioner stressing the obscurity of how much health NHS land is being assumed for housing. A: it is not separately identified in the report, though there is some info on how much is ‘public’ land.

Edwards: How much land is assumed from employment? from social housing? A: there is info on ‘Industrial’ land take, but not on former employment use more widely. Some of the estate regeneration sites are shown but not all. GLA offers to supply more detail on request.

Bowie fierce on low probability of getting family-size housing in high density schemes, e.g. especially those in Opportunity Areas because densities there are planned to be especially high. A: GLA insists that family housing can be provided in high densities, for example 10-strey perimeter blocks.

Ian Gordon asks how much of the extra capacity (measured in dwelling units) results simply from upping density in the 2013 site estimates. This scribe missed the answer.